The 7 Canary Islands are located approximately 1400 km southwest of Gibraltar and between 100 and 450 km west of Marocco in the Atlantic Ocean off the African coast.

The Canary Islands were created about 80 to 100 million years ago as a result of subsea volcanic activities.
Although the Greeks knew about the existence of the archipelago, they were forgotten again after the fall of the Roman empire.

In 1312 they were rediscovered by Lanzarotto Malocello. In 1402 the Spaniards conquered the islands from the original inhabitants the Guanches.

Also called: La Isla Bonita (the beautiful island) or La Isla Verde (the green island) and also, La isla de la eterna primavera (the island of eternal spring). You notice that there are almost not enough superlatives to describe this beautiful island.

Note: Do not swap the island of La Palma with the capital of Gran Canaria Las Palmas!

La Palma is also one of the least touristic islands. No white beaches (but black) no discos, no large numbers of high-rise hotels but peace, beautiful nature, breathtaking views, friendly residents and a huge range of wel maintained hiking trails characterize this island. La Palma is 25 km wide and 42 km long. The volcanic origin of the island is still visible everywhere today. In particular, the Caldera de Taburiente crater with a diameter of 8 km is crucial for the island. But also the mountain ridge with a series of volcanoes between the Caldera de Taburiente and the southernmost point of the island with the scattered older and younger solidified lava flows are not to be missed.
The same mountain ridge divides the island in terms of climate. The eastern African side of the island is wetter than the western side. With the sun rising in the east and setting in the west, in Puntagorda one has to wait in the morning until the sun rises over the volcano. On the other hand, the sunsets are often breathtaking. 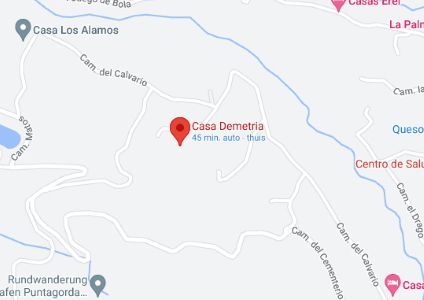